A quick update, just to break the silence

I've posted a new Windows build, and am currently trying to get the client to work fully with the python-ogre deb on Ubuntu. As expected, getting python-ogre to work on Mac is quite a chore, I'm almost there, got everything compiled but running the demos gives me a "wrapper" error, and I'll probably have to understand how the code generation in python-ogre works to figure it out.
Packaging issues aside, I've made a few updates to the client. The lines in the screen represent "Wormholes", which are basically routes between star systems. Currently, only the Risk ruleset uses this feature, so lines won't display anywhere else, such as on the demo1.thousandparsec.net server which usually runs Minisec. 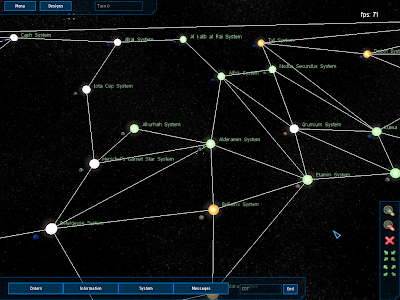 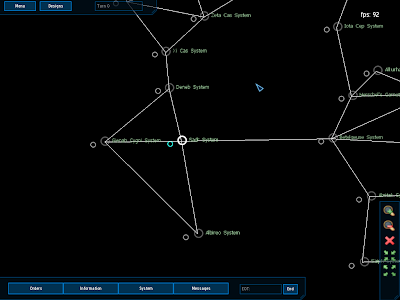 I've also tweaked the "Information" window to show more useful information such as the planetary resources (I tested it with the "Armies" resource in Risk). In general, I'm trying to locate more crashes by testing the client with different systems and python-ogre builds. OgreAL has been a little problematic, and it's one of the things which I am trying to get working with the linux python-ogre deb file.
My main concern about the client is the performance on older hardware. Mithro informed me that even the login screen runs at a crawl on his laptop, which is probably due to the large textures used in the skybox (1024x1024). I guess a solution to this would be to offer a lower-resolution skybox thats selectable from the options menu.
I've started my industrial attachment, so I'm pretty much limited to weekends. Nevertheless, I'll be continuing to update the client, and when tp04 support has been added content management will be a lot more elegant, allowing "media" tags which mean no more hardcoded graphics. Another thing I'm looking forward to is more battlexml support in the servers. On my end, I also hope to include some shaders to give game objects a more realistic look, but there are still many things to work out before I have time for that.
P.S. If you zoom in on the pictures it kinda looks like those old VGA games.
Posted by Eugene Tan at 8:23 AM

Hhow is the tp 3D client for Ubuntu coming along? Thank you.

Hey, sorry for the delay.
Basically, the client runs on Ubuntu (it was the development environment after all), however no .deb files are available yet. If you have python-ogre installed from thousand parsec's repository (http://packages.thousandparsec.net/)
you can download the latest client and test it out. From terminal:
1. git clone git://git.thousandparsec.net/git/tpclient-pyogre.git
2. cd tpclient-pyogre/src
3. ./tpclient-pyogre

I realise not everyone may have git installed, I'll upload a source version asap. Hope that this helps, I'll confirm that these instructions work and get back to you again! You can also mail me at jmingtan@gmail.com if you have any pressing issues :)

Oh sorry, I've realised that the python-ogre version I linked to is not supported on ubuntu 8.10 (Intrepid Ibex). If you happen to be using 8.04 (Hardy Heron) then no worries.

You may also want to get pygame for sound effects, just enter:
aptitude install python-pygame