This week, added some animation to the camera movement to make it more smooth. When zooming in or out, it will move gradually instead of instant 'steps' like before. In addition, there will be animated panning when a system is double-clicked on the system list, or when pressing 'c' to center on the selected object, or when pressing "goto" in the message window. Since it will move in steps every frame, it is somewhat slow when the frame rate is low. This could be solved by having calculating the step size based on the frame rate. A harder problem is how to rotate a camera in a spherical manner around an object, which is probably a staple of most 3d games.

I also added some movement for the ships which will occur after a turn update. This allows you to roughly see where they are going, particularly for enemy fleets.

I guess this week's changes are mostly animation based, so it's a little hard to take screenshots.

Some additional minor fixes
Message window parses html messages now. This was largely thanks to Tim Ansell's suggestion to look at the htmllib and formatter library that comes with python, which saved me from having to strip out the tags manually. I still can't believe the breadth of python's built-in libraries sometimes. Batteries included indeed. One possible addition is to add additional formatting according to the html tags, right now I'm just stripping them out adding line breaks appropriately: 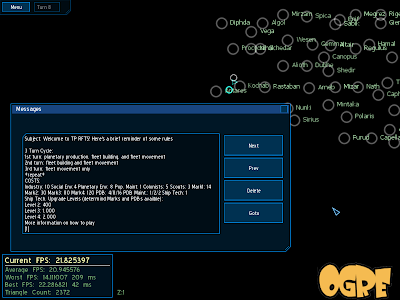 The keyboard shortcuts for zooming in and out (the plus and minus key next to the backspace) is fixed now. Previously, it was stuck in 'icon view' all the time.
Posted by Eugene Tan at 9:36 AM