For this week, I've been trying to implement a view where all the objects appear as icons when the user is zoomed out. The advantages of having an icon view are that the objects tend to get harder to spot when far, as well as harder to click on. Also, it's a good way to increase the frame rate when viewing many systems at once. At first, I tried making icons with letters on them, where an 'F' would represent a fleet, a 'P' would represent a planet and so on. However, the letters turned out to be too hard to read, so I went for pictures instead. 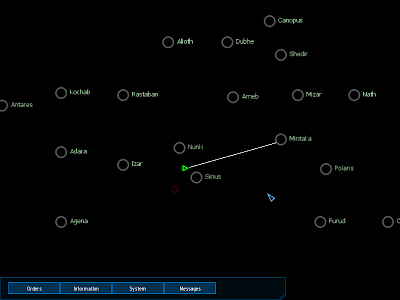 Hopefully what the icons represent is clear enough. Triangles for the fleets and circles for the planets and stars. I haven't coloured the objects according to which player they belong yet, but the colour scheme should be the same, except that I can now colour the planets as well. I'm not sure how to represent different ship types, perhaps I could scale the size of the triangle icon?

Another thing I've been working on is trying to create a starfield for the background. Since the current background code is slow, I tried a few different alternatives to the particle system approach.

The first thing I tried was to create a static image for the background, then make it into a skybox. At first, it looked okay: 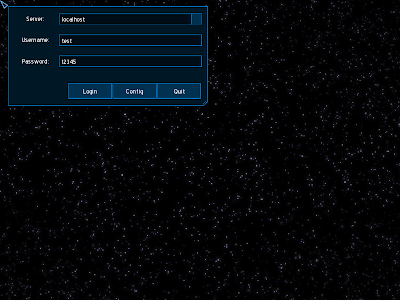 However, at the corners of the skybox the stars appeared warped which made it unusable. I'm not really sure how to solve that issue; after some googling I found one method of using blender to map a sphere and then render the result, but I must have screwed up somewhere because the result looked even worse.

In the end, I went back to the same approach but reduced the "layers" of stars and replaced the star image with a pixel instead. This seemed to give me somewhat better performance. I also made the starfield stay at the same distance when the camera zooms in or out which should make it look more natural during movement. I'm still not too happy with the look of it, but I'm out of ideas for this at the moment. 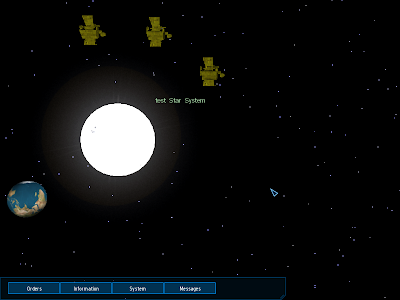 This week hasn't seen too many updates, reason being I just got a new computer and I'm trying to install Mac OSX on it. With a little luck, I can try supporting the Mac versions of the client in the future.
Posted by Eugene Tan at 6:15 AM

let me first say that i have much fun reading your posts and seeing your client mature. I am really looking forward to playing one day! :-)

Then for your icon view problems with the fleets:
You could scale the size of a fleet according to the fleets strength. Details, ie the ships in the fleet, could be shown in a "Tooltip". That would enable players to keep track of fleets easily without flooding the screen.

Who knows where to download XRumer 5.0 Palladium?
Help, please. All recommend this program to effectively advertise on the Internet, this is the best program!