Here are the changes I have made to the thousand parsec client this week.

Movement orders possible by selecting a fleet and right-clicking the destination. Finding out how to send orders in thousand parsec was an important milestone for me. 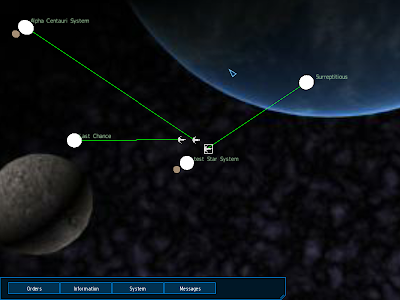 Movement paths are indicated by a line. However, this does not remain when the turn updates. In addition, changing the destination will leave the old line behind. :( I will be getting to that shortly... 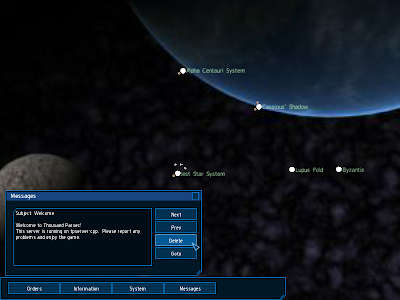 Able to delete messages. I would like the "Goto" button to center the map on the source of the event. For instance, a battle report message would go to the combat location. However I could not find any information in the message object passed by the server that might help. Currently, the message object has id, slot, type, subject, body, turn number and references as it's attributes, and clearly "references" would be a good place to look, but I found it empty no matter what the message. So, "goto" is still in progress. Also, I think a message count in the window title would be useful.

Able to exit to the login screen and re-enter the same game. This was done by clearing all the resources and loading them upon re-entry. However, tpserver logs do not report a client disconnect, so I have find out how to do that before entering another game.

Some bugs I have encountered: 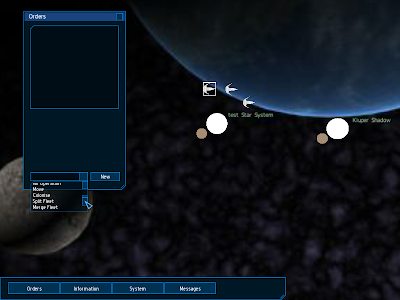 The mouse cursor is hovering over what is called a "CEGUI listbox" object. Since I am using it to show available orders for the selected object, it required removing the list and repopulating it whenever a new object was selected. However I found that it would segfault immediately upon removal of an object. Finally saw a method called "setAutoDeleted(boolean)" for listbox items in the api, which deletes the item automatically when it is removed from a list. After setting it to False I could then remove items without crashing. Hope that this helps other python-ogre cegui users out there, since the setting is on by default. My unqualified guess is that python's gc does not like objects deleting themselves automatically.

What's next
I have been giving some thought to improving the look of the client. I think it should be pretty clear that the current 3d models are all placeholder objects. I've found Vega Strike to be a rich source of 3d models, although I have only played the game a couple of times. Ideally, I would like to have different models for each ship class, but this might become ruleset-specific. So right now I would assign a ship model type to each player, so "Player 1" would always get a certain model and so on.

Planet models should have a texture to them as well, but I'm wondering how to distinguish planets from one another. For instance, some planets could be "Terran" type, "Arid" type, "Acid" type and so on. In rulesets which don't supply such information, I would apply a generic planet type to prevent confusion.

For stars, they ought to have a glow in addition to their texture. Actually mithro, who created the client, has already put in "glow" billboards, but they are not visible as I think I forgot to resize them.

Currently it's not clear which ships and planets belong to each player, so they have to be differentiated somehow. I guess I could change the material settings for each fleet to colour them, but colouring planets would be weird. Perhaps I could change the colour of their text label, but I've already found some colours to be barely visible against the background. A better way would be to surround the planet with a coloured halo, because at least the player won't have to read it.

The skybox currently being used for the background has to go as well. I will try a particle system of white dots with billboarded nebulae. Hope it looks better than it sounds. :)
Posted by Eugene Tan at 7:09 AM

I just found your project and I must say it does look nice :)

I'm a great fan of space strategies, so I'm looking forward to playing with this thing. Keep up the good work!