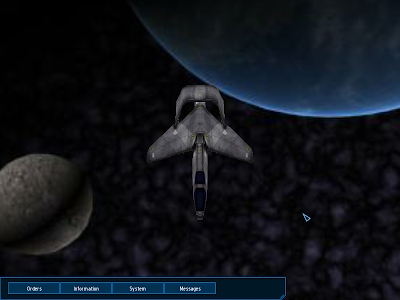 A huge debt of gratitude goes to the Vega Strike project, this model is from their upcoming Ogre port. I think this model would be good for a 'scout' class ship.

Actually, Thousand Parsec does have it's own talented modeller, Epyon, and his work can be viewed here. (Check out the cool concept art as well!) However, I encountered difficulties in bringing over the meshes from the .max format. Since I don't have that software, I had a friend to convert it to ogre for me. Portions of the model would disappear and also I was apparently missing some textures. I think these are all just temporary problems, and with a little effort they will be ready to roll as well.

Going back to the 'Scout' model, I found that scaling it in proportion to the planets would make it lose a lot of detail, so I will try scaling the size of all objects up to allow further zooming in. 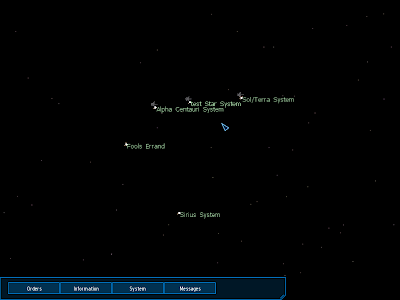 It's extremely faint, but if you squint (or click on the image) you can see the previous background has been replaced by a starry background. I hope to make it dynamic as well, in the sense that when you zoom in it will generate more stars further back, just like actual space. And other possibility would be to tweak the particle system so it generates clumps of stars with a glow to them.
Posted by Eugene Tan at 7:36 PM

I think it would be a good idea that when you zoom out far enough you change to "icon view".

Have you played Supreme Commander? It does this quite well. You could possible take it to another level as you zoom out, ships become icons first, then planets become icons, then lastly systems become icons.