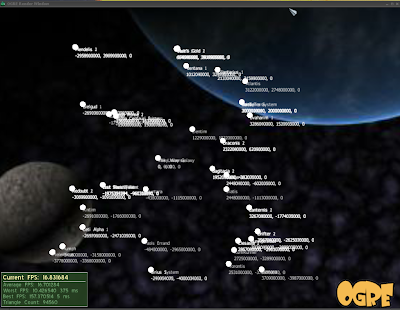 So it turns out that the stars were just too far apart to appear. Scaling down the distances lets everything appear, and the starmap is a lot less lonely.

Now, since they are so close, it's hard to read their names. Anyway, it's a little progress.

On a different note, I hope to make a few Arch PKGBUILDs for the various thousand parsec sub-projects and so far I've done tpserver-cpp which uses the current 0.4.1 release. I've since found that the git version is a lot more stable and featureful though. Hopefully there will be a new stable release soon.
Posted by Eugene Tan at 10:30 AM